A Gillette Police Department investigation into an armed robbery at Long John Silver’s – A&W restaurant last week has resulted in the arrest of three men. Lieutenant Chuck Deaton said the men; ages 18, 19, and 20 are also believed to have been involved in several additional criminal incidents this month. The three men were being held at the Campbell County Detention Center on several felony and misdemeanor charges. Listen to more details below: 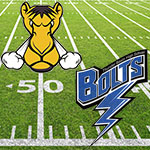