Journey keyboardist and guitarist Jonathan Cain says it’s time for the band to move on after bandmate Neal Schon slammed him for visiting the White House last year. Schon expressed anger in August 2017 when Cain, vocalist Arnel Pineda and bassist Ross Valory visited Donald Trump under the Journey name; the guitarist felt it should have been a private matter and not involve the band. Cain has now spoken to Rolling Stone about the spat, saying it’s time for all of them to put it behind them and move forward. Cain said, “for me, it was a historical chance to go and it wasn’t political. I’m a history buff and was dying to see where all this history took place.” He continued “Neal and I weren’t on speaking terms during that time. He was bashing me, so I didn’t think he would want to come. That’s all.”  According to Cain, their relationship is strained but said “At this point, I’ll see him at rehearsals for the tour… we meet when we get on the road.”  Journey will head out on tour with Def Leppard across North America later this year. 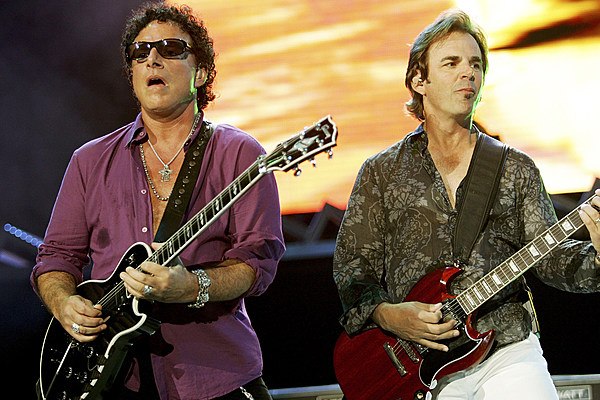 Via ultimateclassicrock.com
Journey keyboardist and guitarist Jonathan Cain said his 2017 feud with guitarist Neal Schon was…
02/16/2018 8:14 AM